Despite the fact that Shakamak State Park does not allow us to make mud anymore, God took care of that this year as the rain earlier in the week created enough mud that last for today’s obstacle course. After changing the course last year to include several stations which teams ran from station to station last year, everyone running at the same time, we resorted back to the more traditional obstacle course which consisted of 14 different events.

1. Truck Push — 4 campers push the rest of the team in a truck 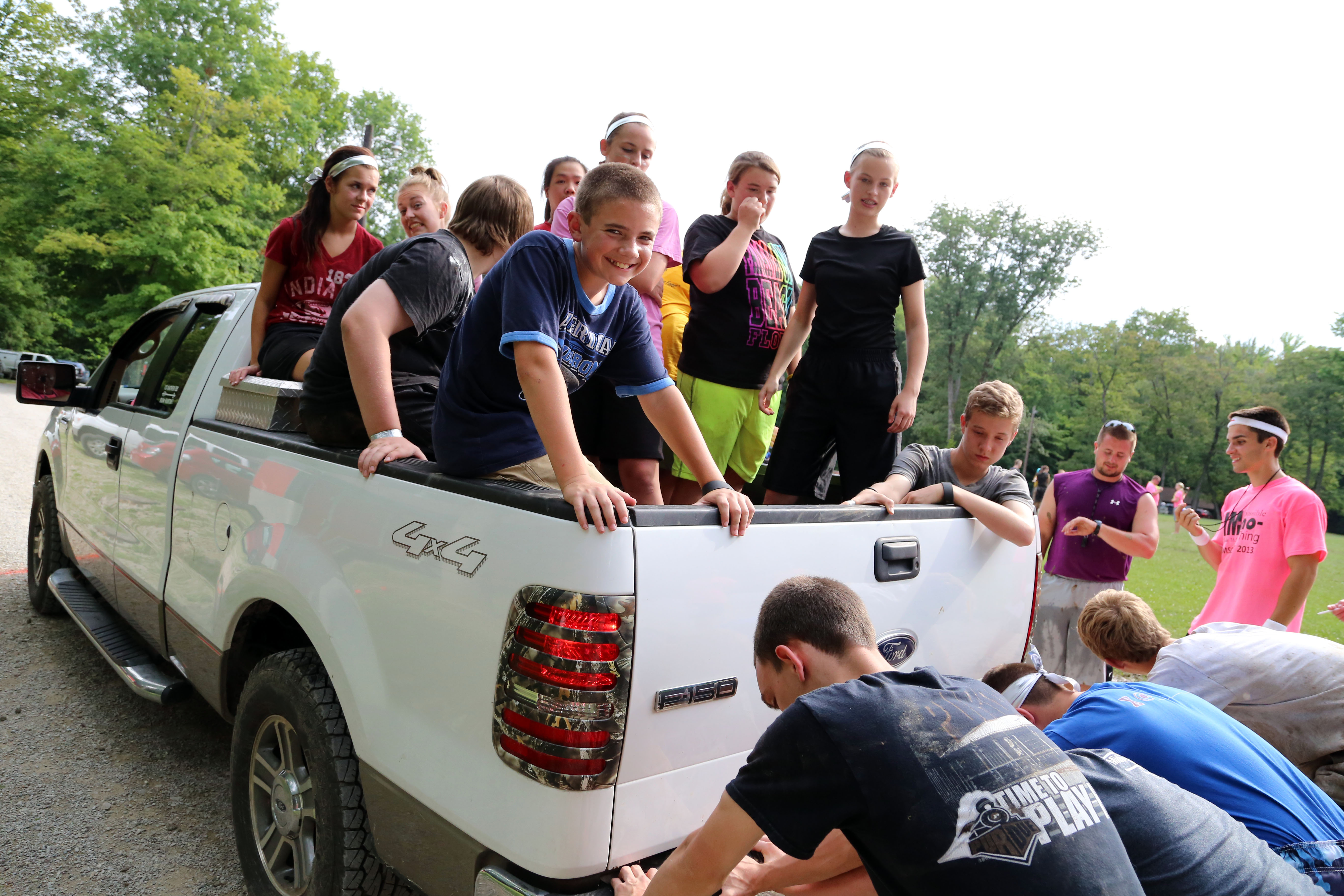 2. Messy Hall Lay-down — campers lay down on their stomachs, shoulder to shoulder in the mud and make the line of campers reach an ending line 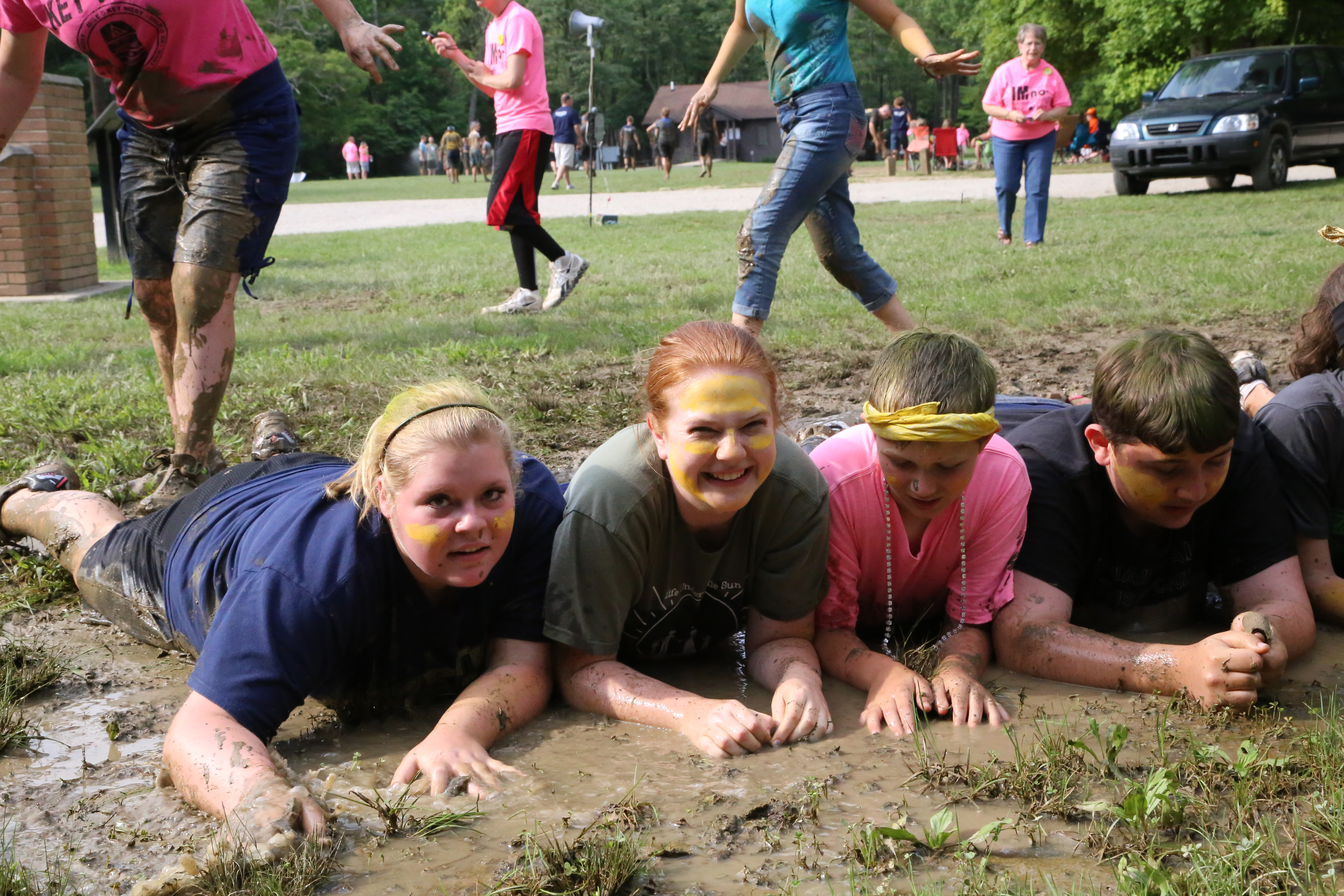 3. Human Chain — after sprinting to the upper sports field, the campers make a chain by holding hands and must follow a path in and around trees without ever breaking the chain 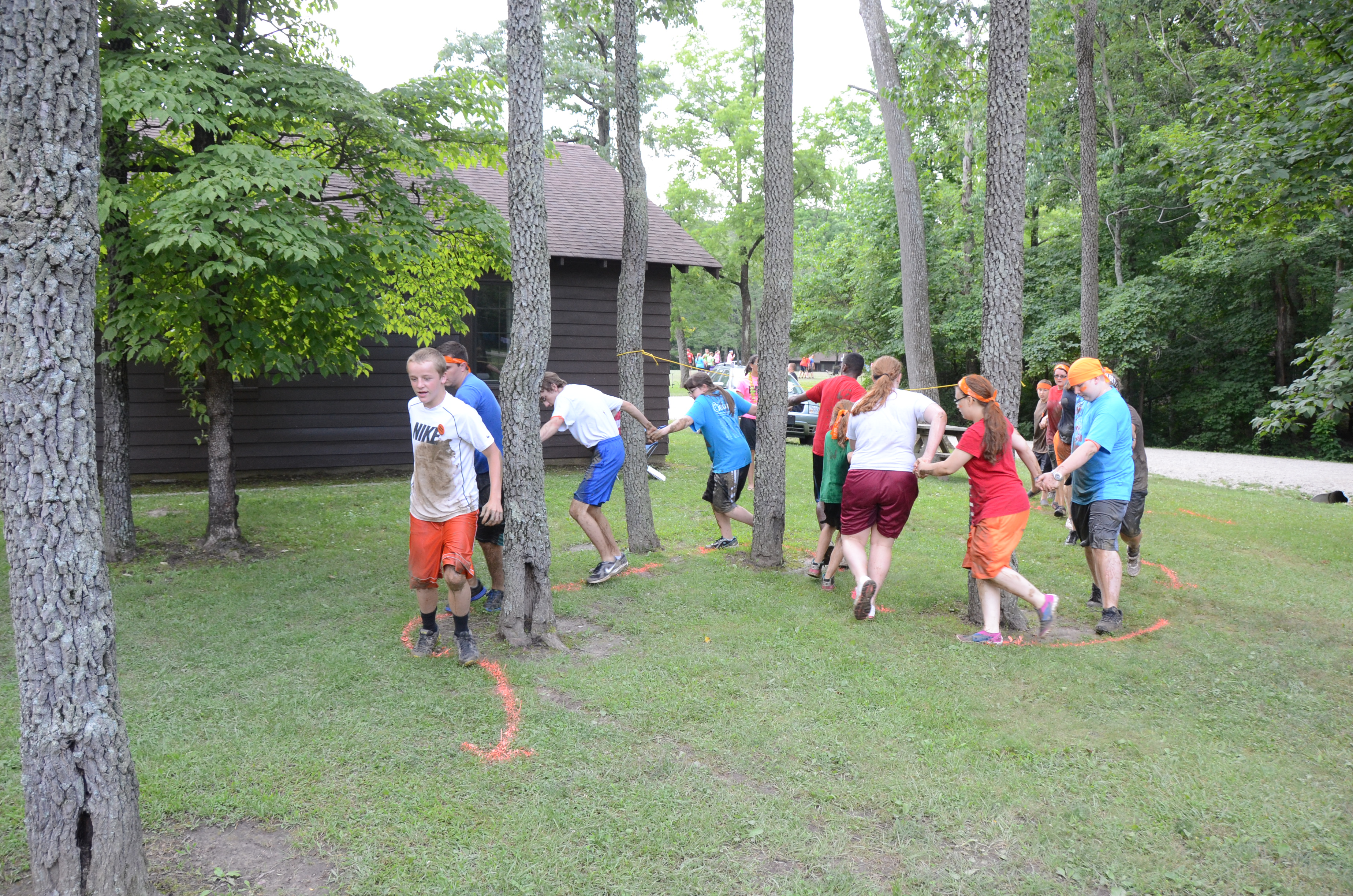 4. Mattress Surfing — the smallest camper lays on a mattress and “surfs” over their teammates who are laying on their backs and scooting the mattress over top 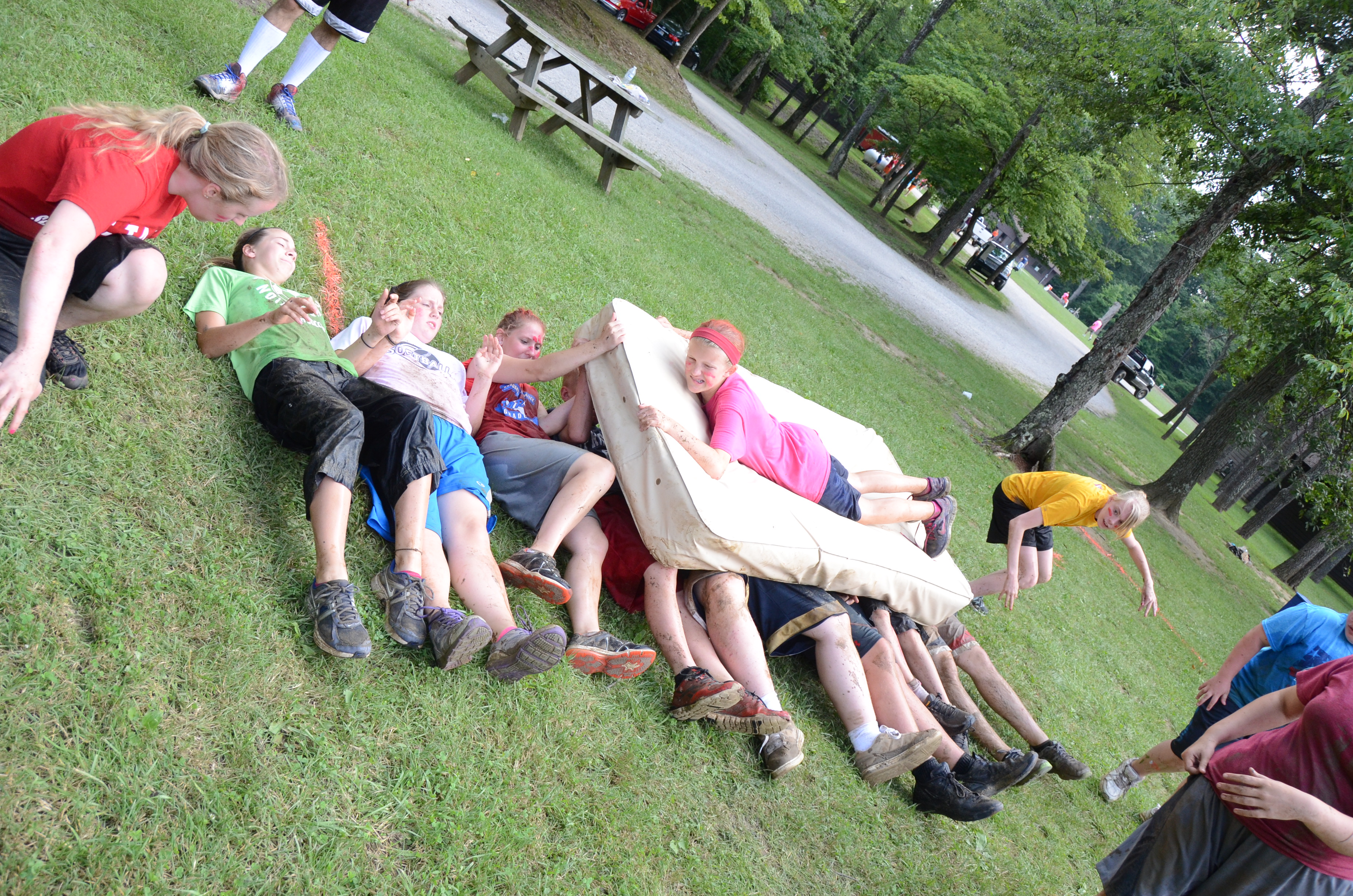 5. Disc Golf — each camper throws one frisbee toward a hole/net for bonus time off 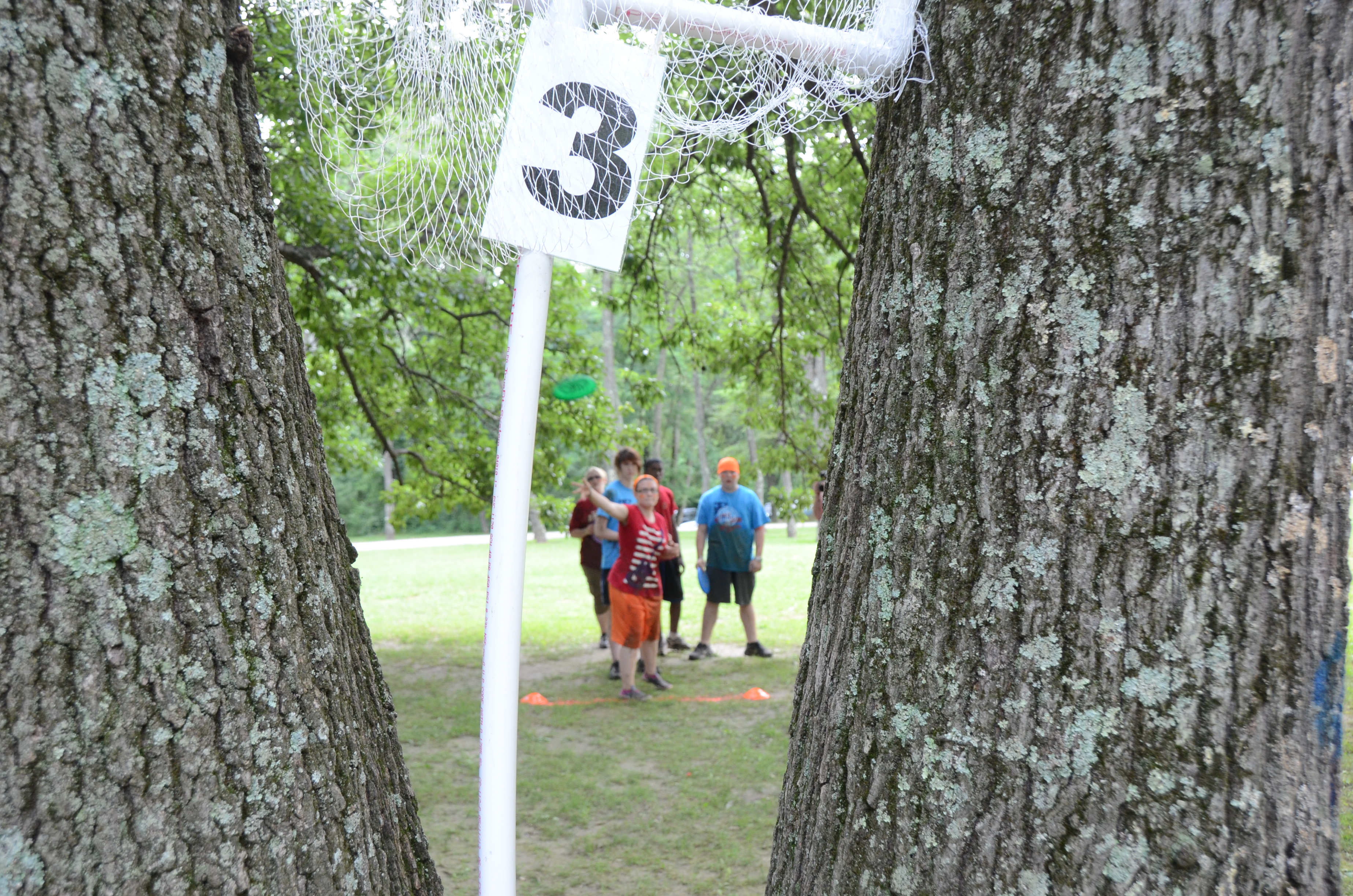 6. Volleyball — Part A: campers must lay down on their stomachs while holding each other’s shoulder in the mud from one corner of the volleyball court to the other.  Part B: the team must be half of the squad on each side of the net to volley back and forth. More volleys equal more bonus time. 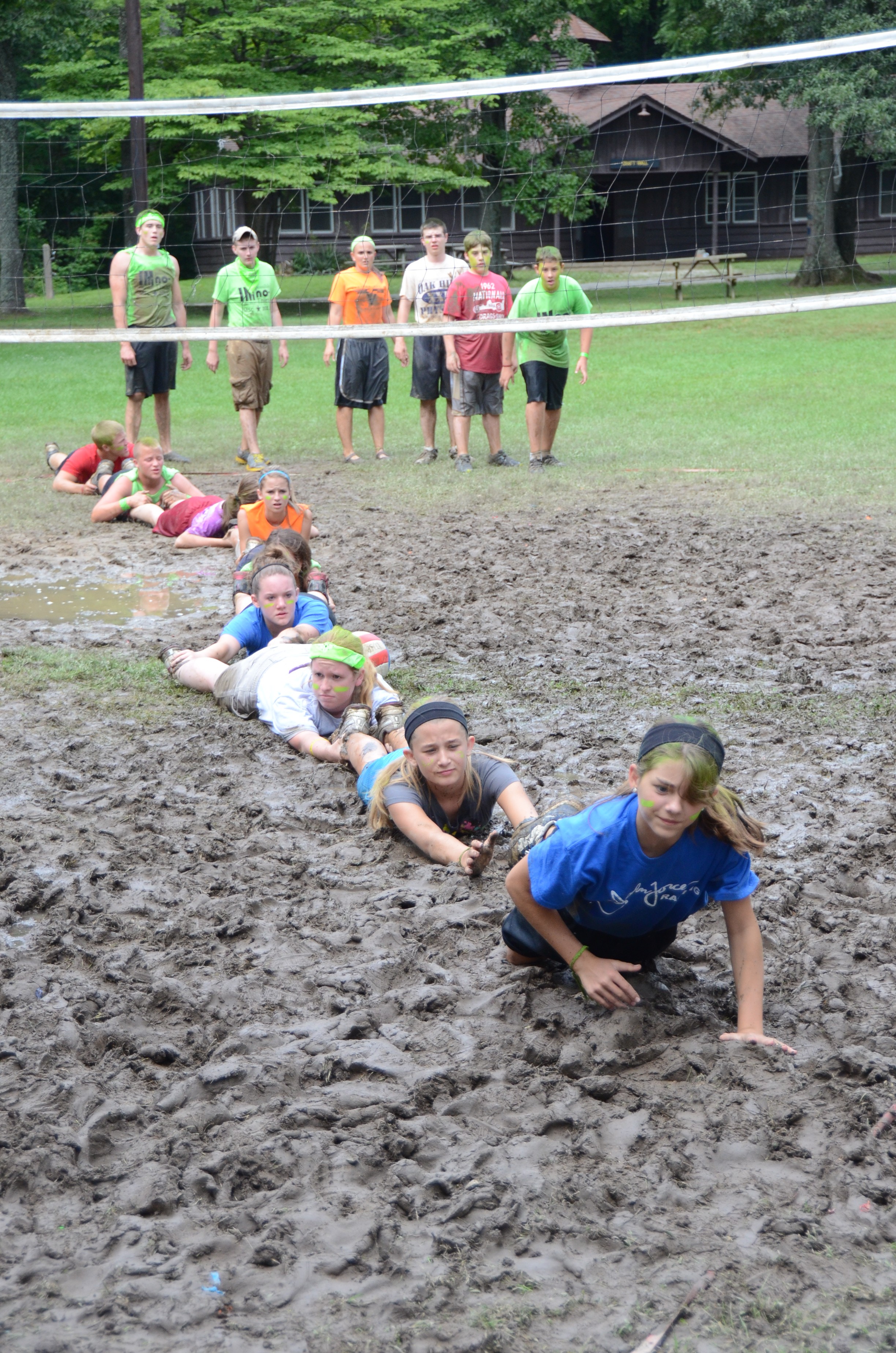 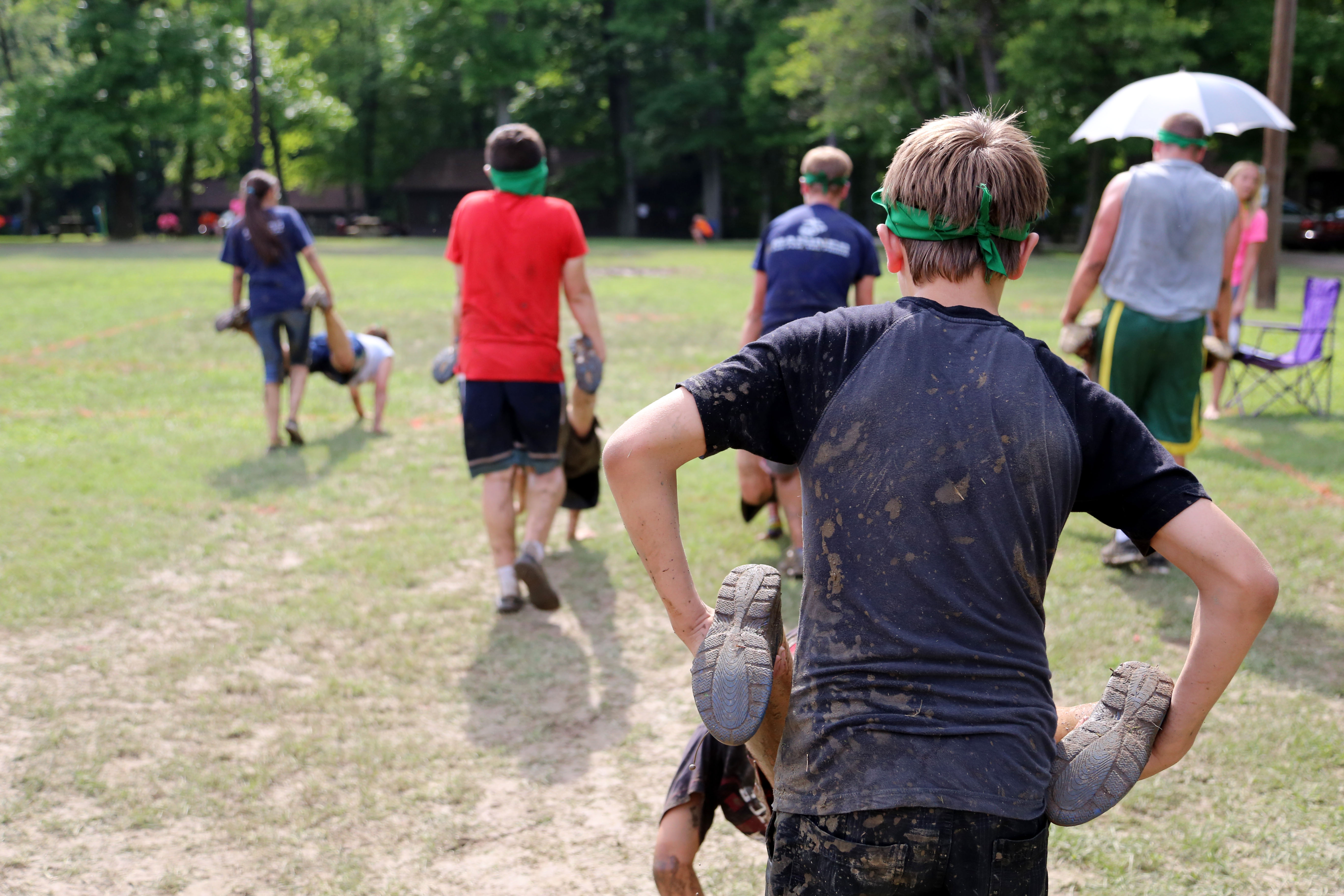 8. Boardwalking — the campers must go four at a time while standing on two wooden boards, using ropes to lift themselves one step at a time, they move toward a finish line 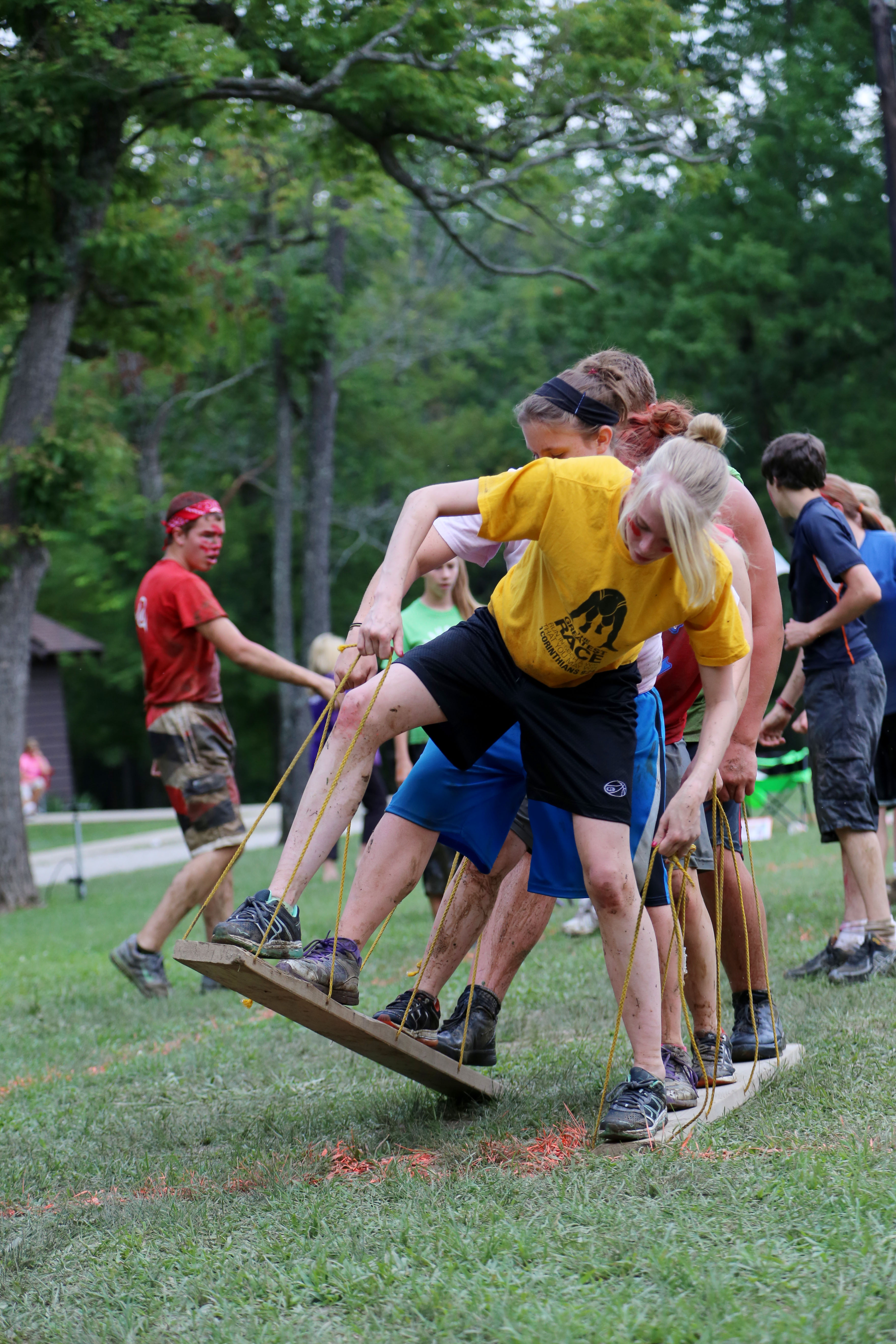 9. Bat spinning — 2 campers at a time must spin their heads around a baseball bat five times 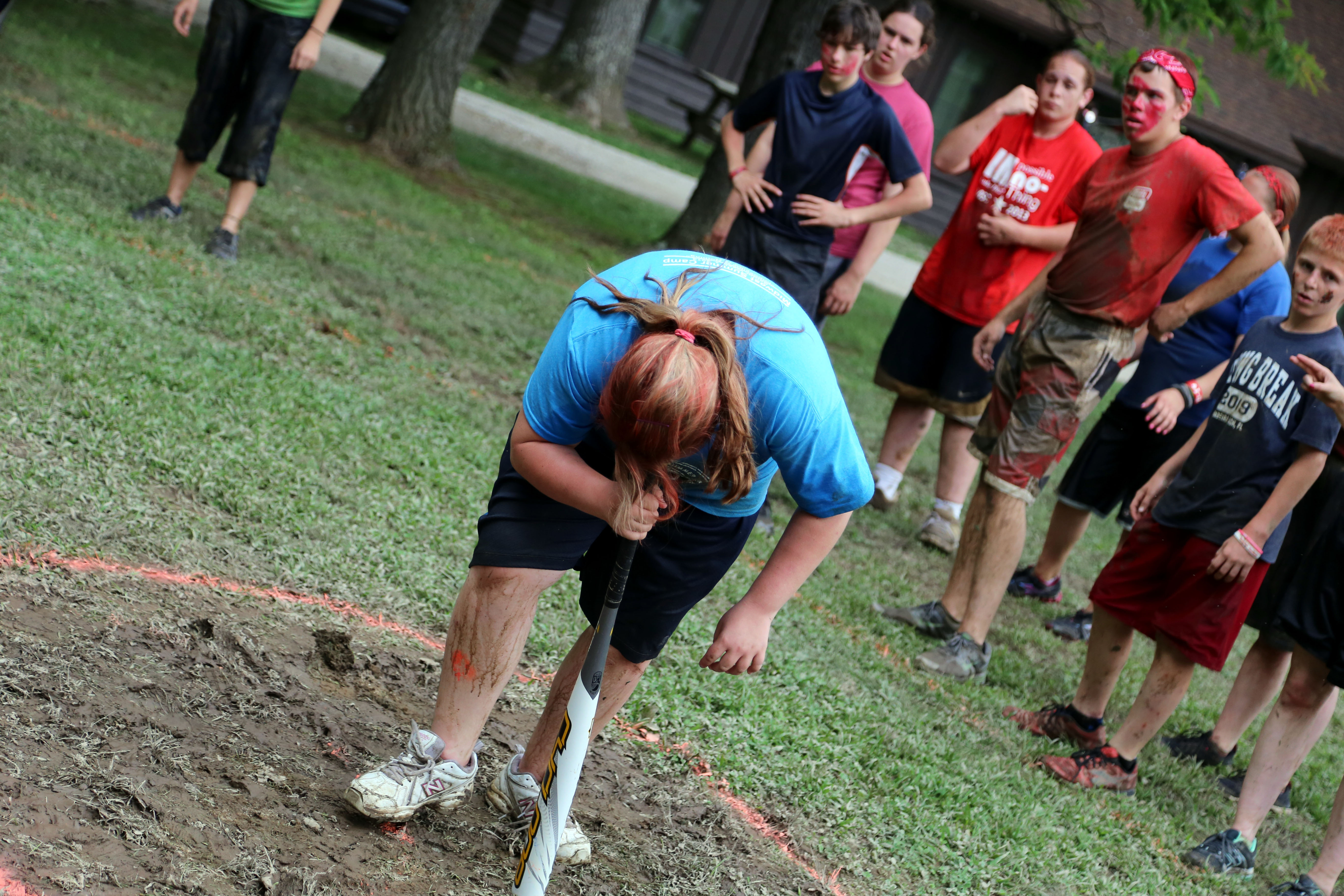 10. Water Balloons — campers must fill up five water balloons and then throw them to knock down a stack of soda cans while avoiding pool noodles 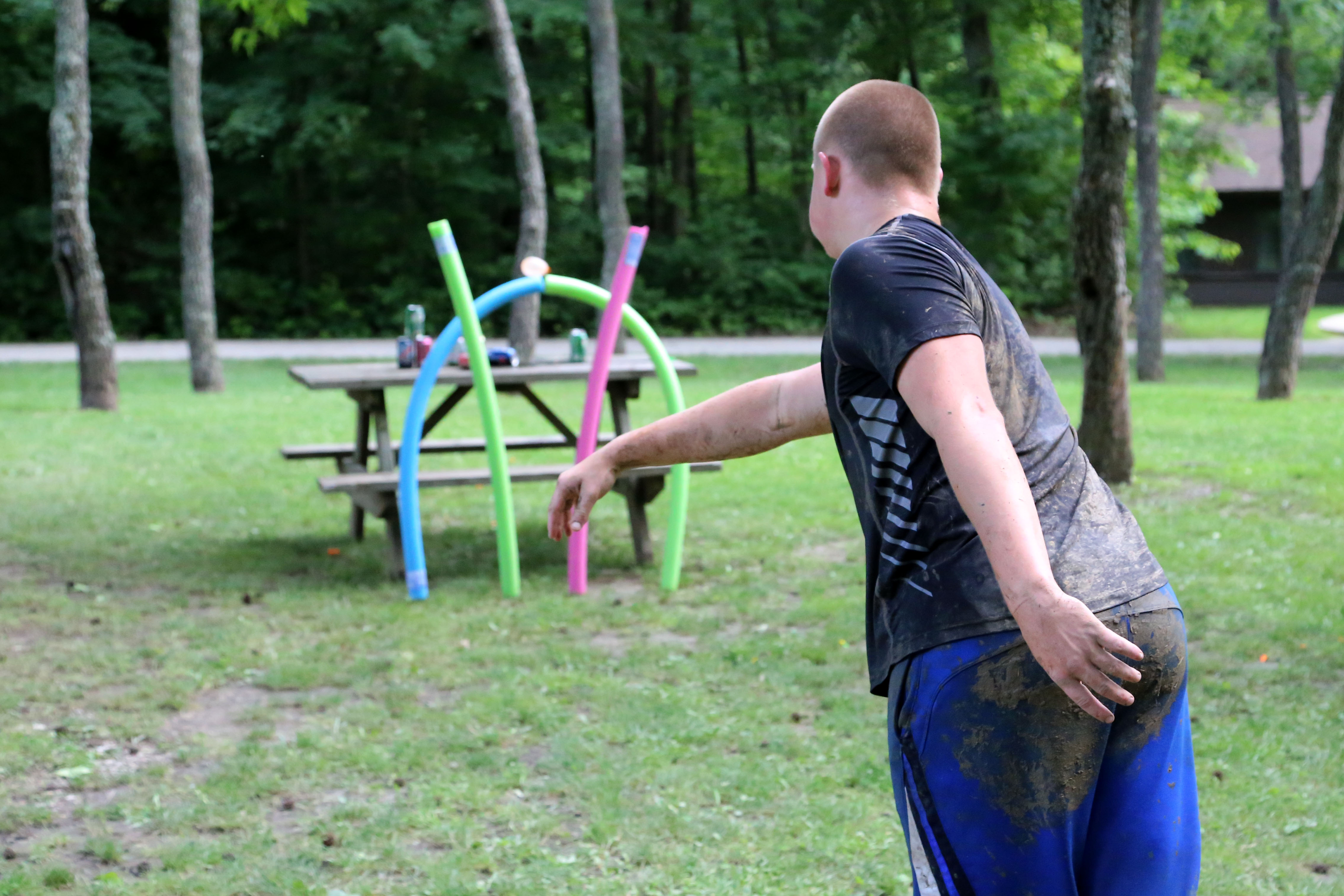 11. Leap Frog — campers must form a line and leap frog over each other through mud and water to reach a finish line 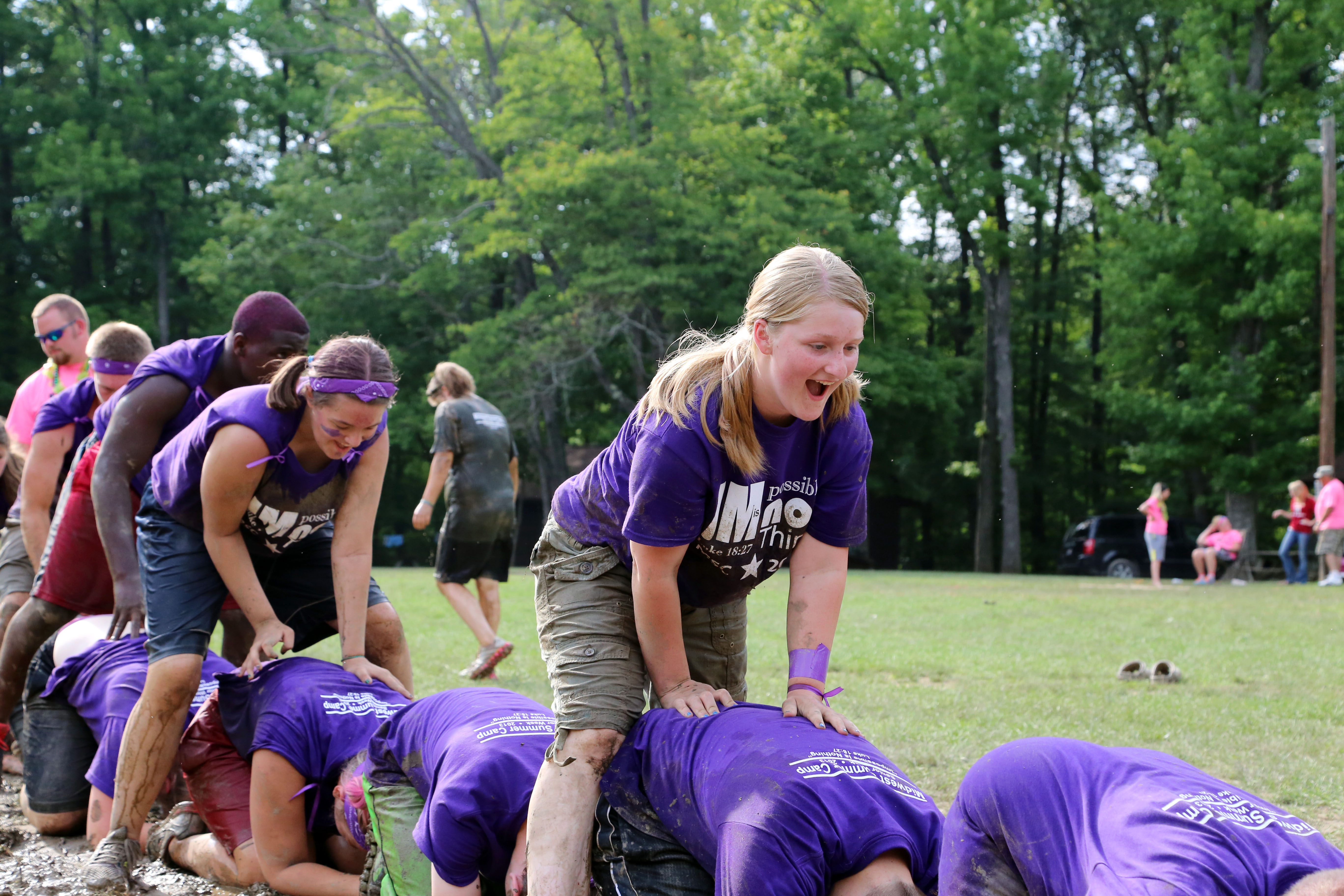 12. Tunnel Crawl — campers must line up in the mud and crawl through each other’s legs before one member crosses the finish line 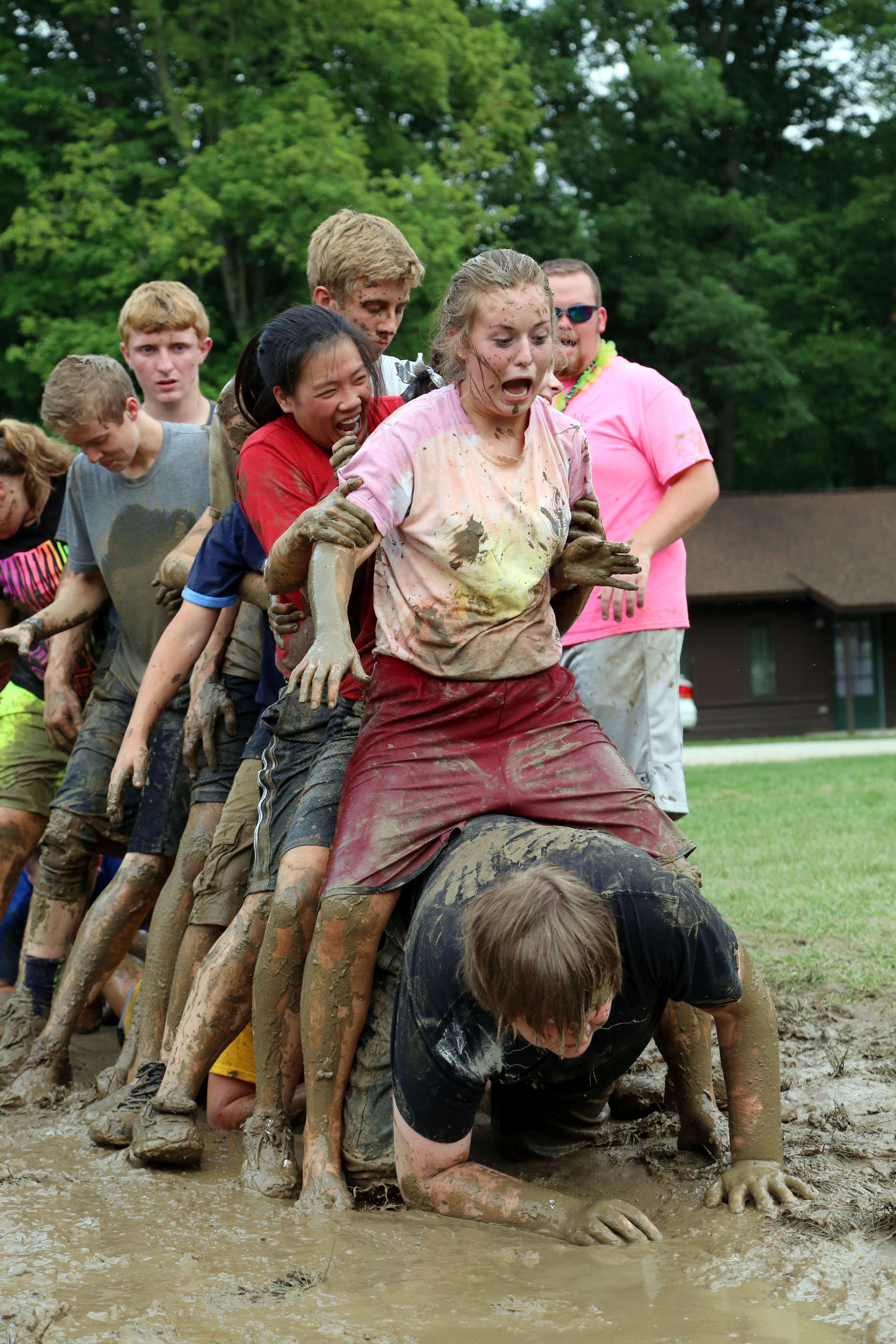 13. Food Station — campers must eat/drink a random piece of food/drink. Campers are not allowed to spit out or vomit up the item

14. Wall Flash Mob — campers must step onto the amphitheatre brick wall and complete the “Are You Ready for This” flash mob. Completion of the flash mob ends the obstacle course.

At the conclusion of the obstacle course, the campers were covered from head to tow and had to be hosed off before entering the cabins to take a shower.